A short story of what happens when you wait until the last minute for building repair projects.

Property mangers and building owners alike can find it daunting to fix that leaky roof or cracked support structure when there are plenty of other daily fires to put out. They know it’s important, but somehow it’s always pushed to the “I’ll do that tomorrow” list.

That being said, it is often a common trend in the building envelope industry to find it very hectic with repair companies and consultants right before the snow flies. Waiting on that repair project, can actually be costing you money in the long run, here’s why.

Property Management Company A called a Mr. Consultant B with the issue that there was a water leak in a utility closet. The call came in late October, in which Mr. Consultant B went to asses the scene the next day. Upon his discovery, he had noticed that the leak had been coming in from outside, and had been an issue for quite some time. This may have gone unnoticed, or simply ignored, either way, it was important to act fast. Each time it rained, more and more water was leaking into the utility closet, and causing a hazard to the electrical wires.

Over time, the leak had grown in size due to water getting into the crack, freezing, expanding, and creating a larger gateway for more water coming in.  It was apparent a repair company had to be called to fix the issue right away before any more damage was caused.

The issue with contacting a repair company in later October is this- everyone else was doing the SAME THING! Therefore, their wait time to get this problem fixed was 8 weeks or more – putting them into December, when it’s too cold to fix the problem at that point. Sealants are not able to hold in extreme cold, and there is also a shortened window of daylight in the winter months.

The Property Management Company was forced to pay a premium to a repair company to come in on short notice in order to fix the issue before the freezing temperatures made it impossible to do the exterior work.

Therefore, by waiting until the end of fall to get a problem fixed, in New England it will end up costing much more money than it would if the problem was fixed during the summer months. 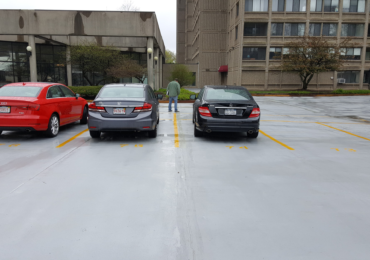 Comments Off on Parking Garages Need Love, Too!